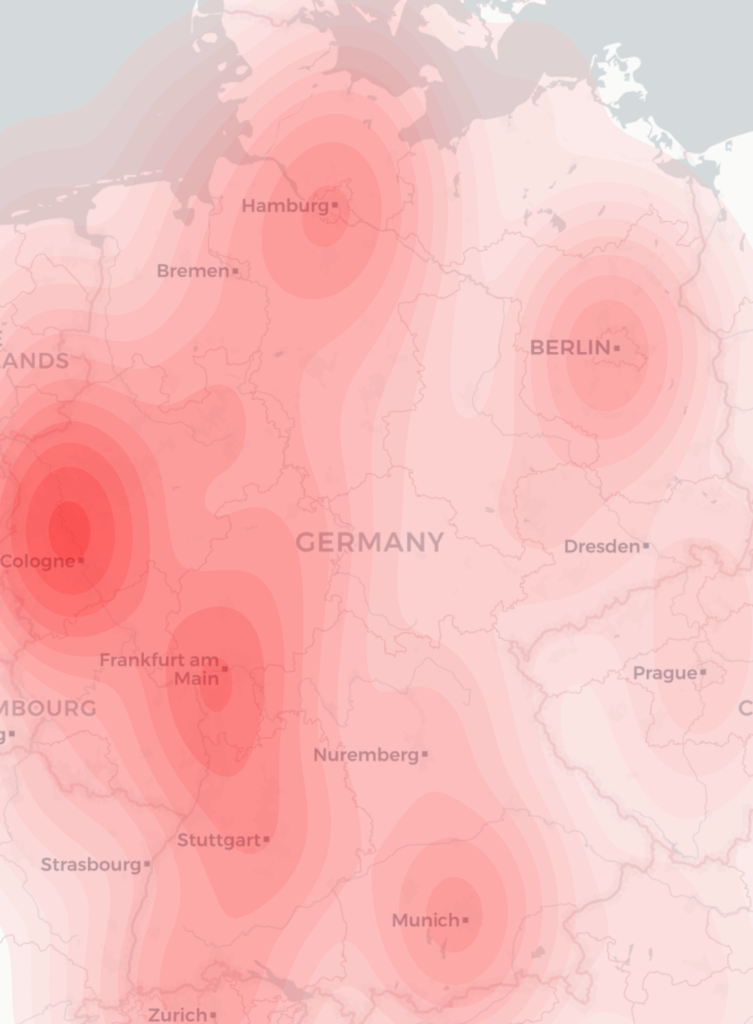 For a project recently I needed to produce a geographical heatmap with millions of data points. I first tried using R with OpenStreetMap rendering, but I couldn’t make the heatmap display as flexibly as I wanted. Then, a friend suggested I try using python with the geopandas library. Even then, inspite of some examples in the manual and even a heatmap-based example, I couldn’t make the map look how I wanted with the interfaces that were exposed.

There were a number of issues:

So, looking through the geopandas code (which mostly relies on seaborn kdeplot) to generate heatmaps I pulled out various bits into my program so that I could have full control over these processes. Here is a short runthrough of the resulting code:

First, we include libraries, read command-line values and set up the area of our map as a geopandas object

Then, we pull out the bounds both in latlng format and convert the area into Spherical Mercator for web display. We need to plot everything in this so that we can pull in open street map tiles for the background later.

We now read in the CSV and drop any data that we wouldn’t display:

NOTE: I tried doing .to_crs() on the CSV data using normal lat/lng representation to convert into Spherical Mercator but it was very slow. As I’m generating the data itself from PostGIS I just run the conversion in that instead. The data I have is basically using the freely available MaxMind geoip database to generate a list of lat/lng/radius. I then pick a random point within that radius to output to the CSV file using a query like:

Then comes the hard bit – converting these values into the heatmap using an algorithm called KDE. These bits were lifted and simplified from the kdeplot routines mentioned above, but fortunately although not exposed by seaborn the underlying scipy.stats module contains a weighted KDE which is easy to use.

The levels output variable is then the weights of all points on the heatmap we are going to output. We can apply a mathematical function to this (in this case take the quintic root) in order to scale the data appropriately, and output:

By generating a palette ourselves we can add an alpha channel to each aspect so that the underlying map will be visible. However there is quite a lot of noise at the lower levels so we want to hide all of them completely:

We then add in the OSM base tiles, which is a bit of a mess as the contextily library seems a bit immature:

Finally we can tweak some of the output settings and save it as a png file: