As an end of term treat, the local council arranged for my china painting class to go on a day trip to Iznik. Iznik (Greek: Nicaea) played an important role in Christian church history as well as Turkish history, even serving as capital city for a few decades in the 1200s (click here for more historical information). Later on it became the cradle of Turkish çini (china), initially taking inspiration from Chinese work, and later developing a style of its own (click here for more on Iznik pottery). 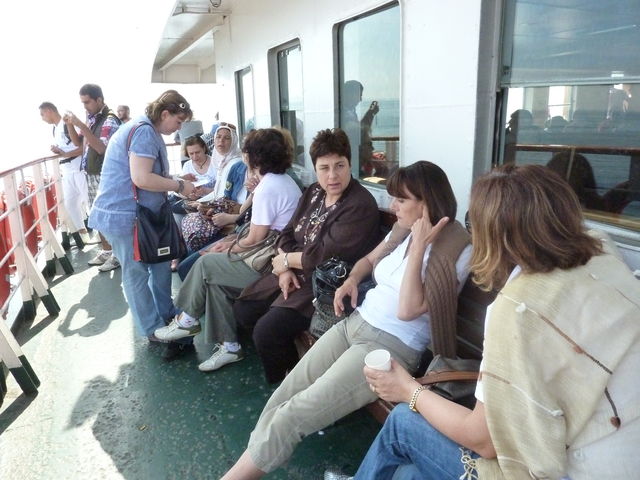 We started out by taking a bus to the nearby ferry (above) and crossing the Marmara Sea to Yalova where we continued for another hour by bus to Iznik. Our first stop was the Adil Can Nursan Art studio. Adil Can was our teacher’s teacher, so we were privileged to get to go around the studio and even see the workshop. Here are some examples: 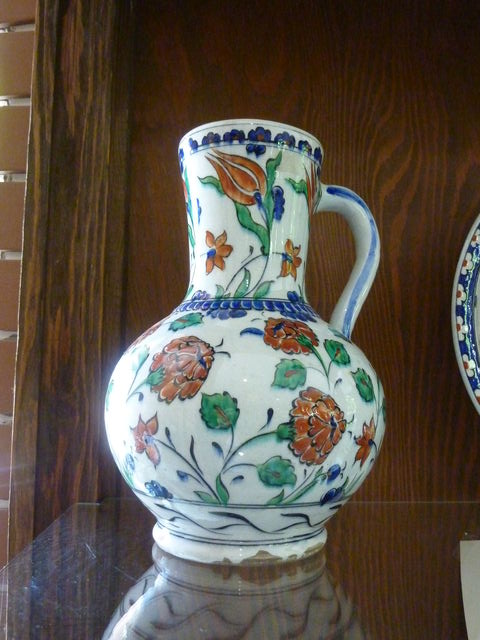 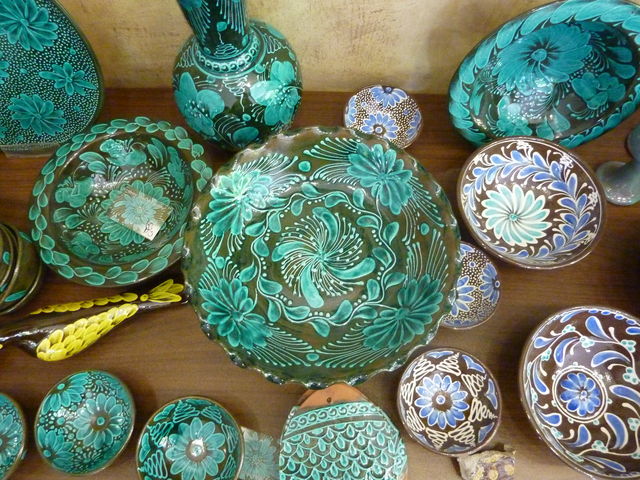 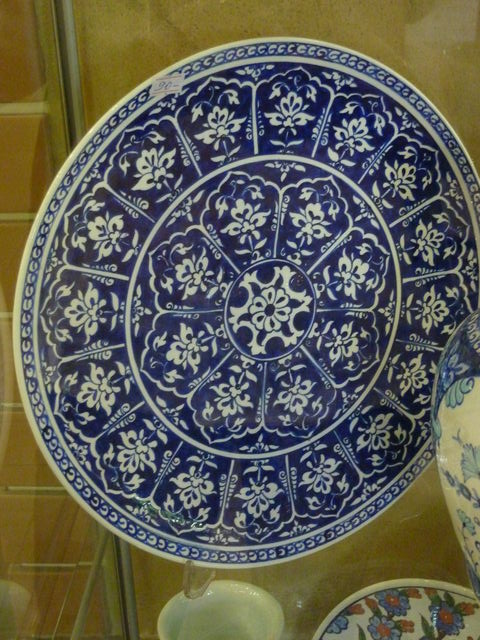 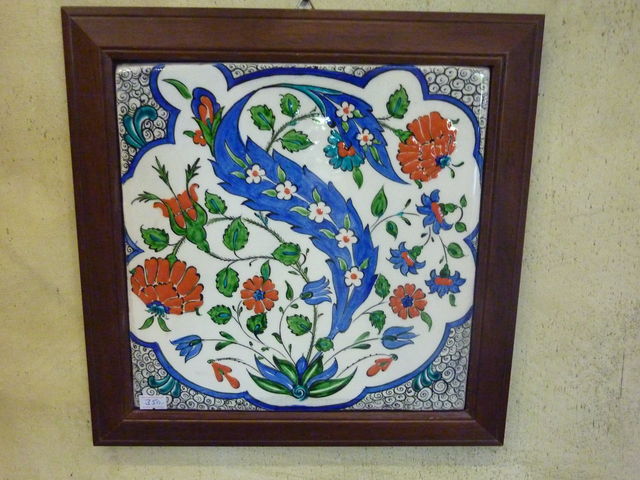 After our tour of the studio we went to the Aya Sofya (St Sophia) church where the Second Council of Nicaea was held in 787 AD (the first also being in Iznik but not in this church. It should be mentioned that this is not the original as that was destroyed by earthquakes). 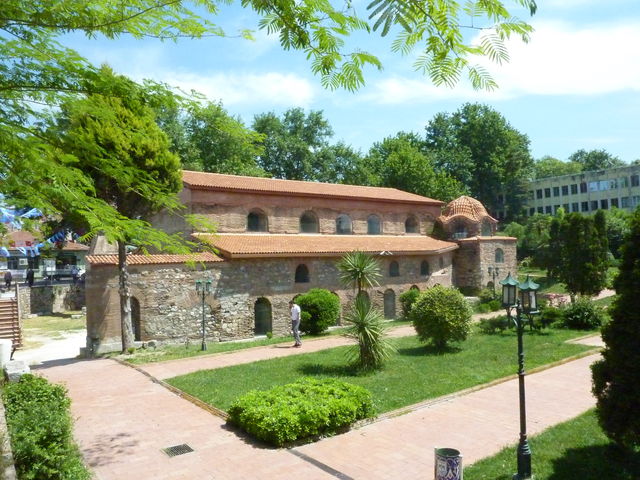 Our tour then continued on to Köfteci Yusuf, a local eatery (with a few branches elsewhere too) specialising in köfte and kaymaklı ekmek kadayıf. Köfte is Turkish for meatballs or rounds of meat looking like little burgers. It’s a dish taken VERY seriously here, and the köfte at Yusuf’s place was fab! 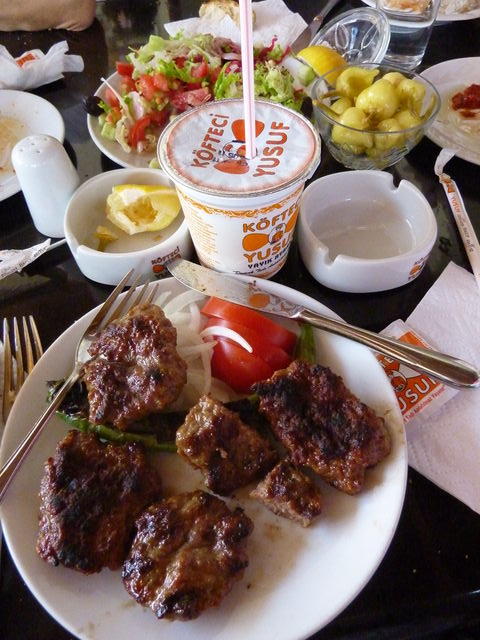 Kaymaklı Ekmek Kadayıf is also a regional speciality (according to my friends). Kaymak is clotted cream and kadayıf is the word used for a sugar syrup and honey soaked pudding. This kadayıf is ‘ekmek‘ (bread) kadayıf as the pudding has a spongy bread-like texture. It’s DELICIOUS, but tooth-tinglingly sweet! 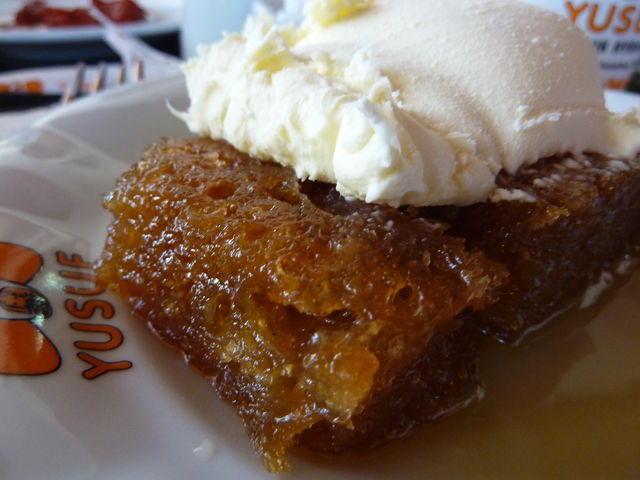 After stuffing ourselves we had a 25 minute walk in the hot midday sun to the Iznik Foundation where pottery is still being made. It’s apparently almost impossible to tour the place, but our teacher managed to get us in (Queen Elizabeth has also been here according to photographs proudly displayed all around the building!). Unfortunately taking photos inside was forbidden, but even the grounds of the place are inspiring, not least after the grey concrete and noise of Istanbul. 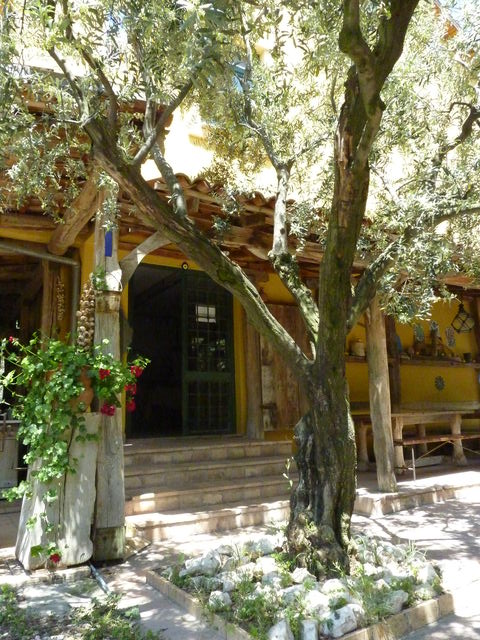 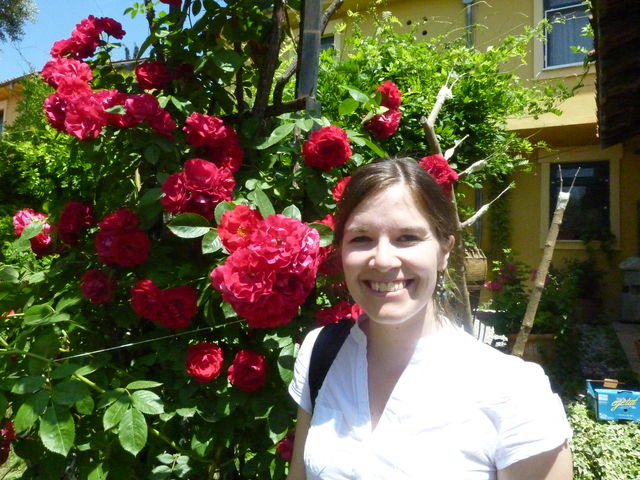 After leaving the foundation we walked back to the town centre on another long walk – I thought it was just mad dogs and Englishmen who went out in the midday sun…! We visited the small but nevertheless impressive Iznik museum (below) with some lovely examples of excavated china work, and one huge ceramic jar with a human skeleton inside – euugh! Apparently giant ceramic pots were an early form of coffin! Shame we couldn’t take photos inside the building. 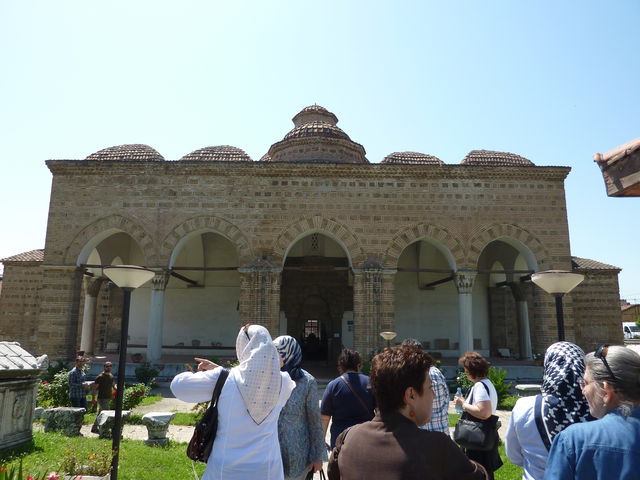 As you might expect, there are plenty of places to see and buy china in Iznik, and after a MUCH needed stop for tea in a nearby tea garden (below top) we then went to a fine row of teeny boutique shops where local china painters were exhibiting their work (below). 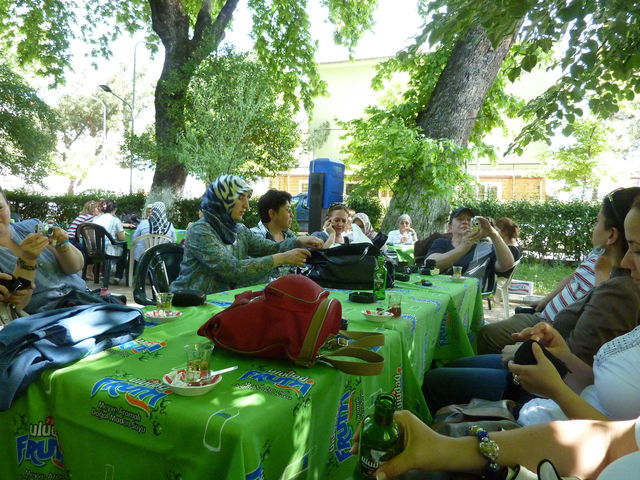 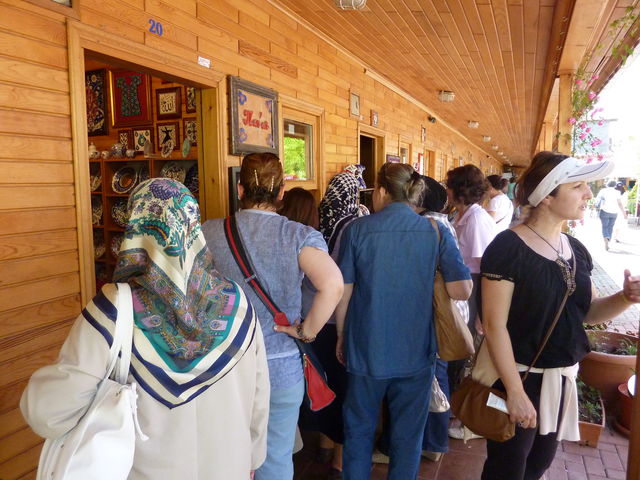 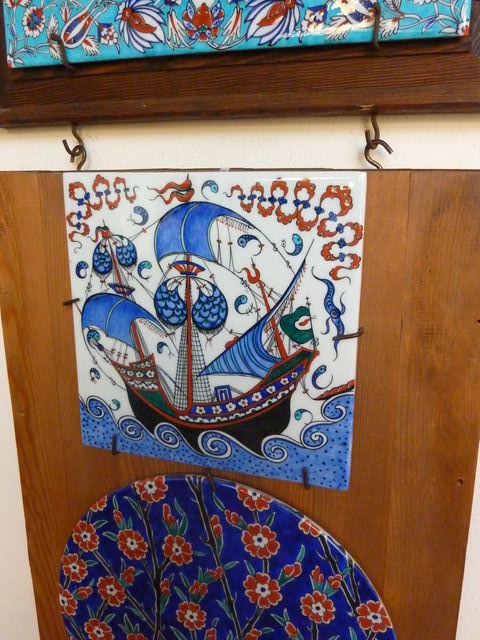 We also went to the Medrese, which was historically a place attached to a mosque where young men could be educated in Islamic theology. Now, however, it is a lovely quiet courtyard surrounded by artisan shops and with swallows nesting in the cloisters. I had a coffee and was shown by the lady in the cafe how to make traditional Turkish coffee (actually, I already know, but it was nice to make friends 🙂 ). A real personal highlight was then going to a chinaware shop which instead of ready-made goods sold plain white ‘biscuits’, ie. unfired pottery goods for you to design and paint yourself. I bought some plates and jewellery bases in the hope that I can paint some of my own designs over the summer… we’ll see… (click here to see some of my previous work if you’re curious!)

Finally we took the bus to the edge of Iznik lake and had tea and ice cream overlooking the view. The lake is stunning and there were children swimming and playing as well as rowing boats gliding across the surface in the far distance. Beautiful! 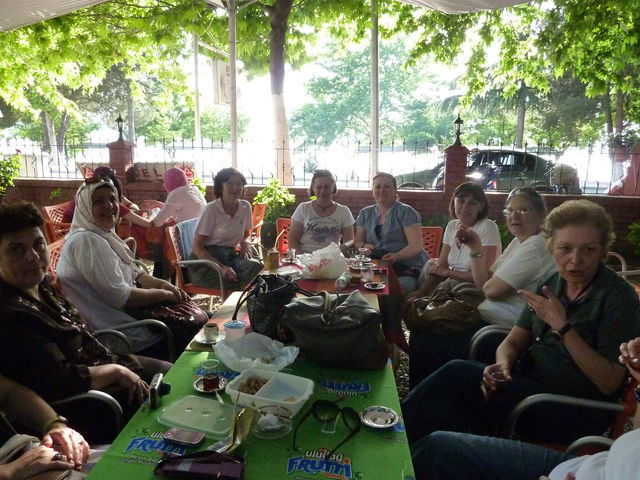 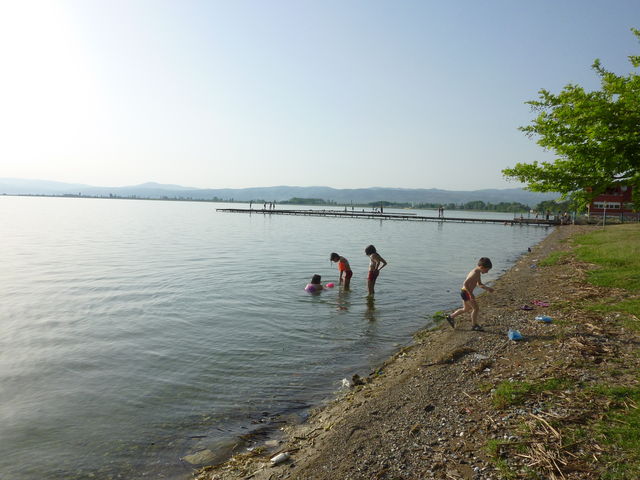 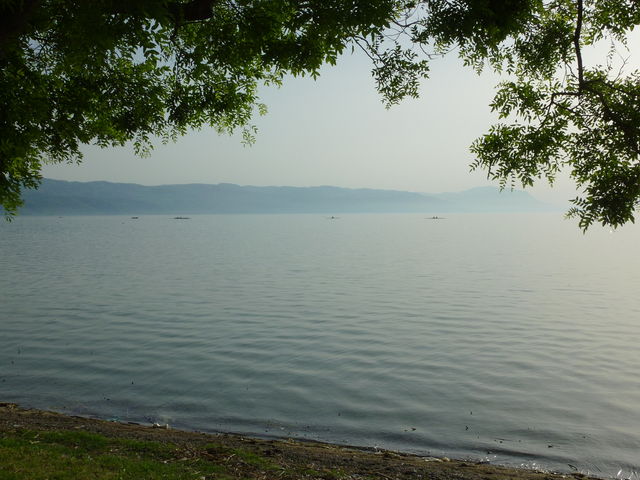 Finally it was time to head back home and we piled back on the coach and settled down for the two hours back to Istanbul. As the ferry was leaving the port a lone stork slowly flapped its way across the sky above us. A real pleasure of a day with many happy memories 🙂